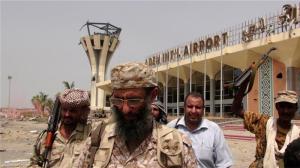 There was dramatic news last night of a change in Aden as twitter was alive with messages, with many Arab news websites carrying stories of the recapture of the airport.  This was grandly named “the Operation Golden Arrow for the Liberation of Aden”.  Those from the south are delighted.

I haven’t been able to find any commentary on this latest news in Yemen this morning, so here goes, my view. This has to be hopeful news in the short term for the Adeni people who have suffered under double siege by Houthi militias and Saudi Arabia – and also suffered from multi-pronged attacks, with heavy militia activity plus aerial bombardment from the Saudi led coalition – there is now hope of assistance arriving in Aden, and the fighting may be less intense. I had a lot of messages on Twitter yesterday evening and some with speculation – for example, I even had pictures of military machines entering Aden port but this morning I read that it is still an area of intense fighting, and also I read stories of Saleh fleeing, but can’t find confirmation of that this morning either. It will be easier to deliver humanitarian aid with the airport open; those now with control over the airport will presumably want to win friends by making this possible. These changes mean that much needed cash might also be available in Aden – the banking system in Aden had closed down and institutions like MoneyGram were no longer functioning making the economic situation impossible for Adeni people under siege. The World Heath Organisation also managed to bring in a shipment of medical supplies on Saturday, the hospitals in Aden had virtually no supplies left before that arrived. So good news in the short term.

In the longer term, Aden has suffered more infrastructure damage than most cities in Yemen, virtually all businesses have closed down, all institutions have closed and many irreversibly damaged, most hospitals have closed (and the few still functioning closed to everything except emergencies due to direct effects of conflict). International organisations have left; there is no certainty that they will return soon. It is extremely unlikely that Southerners will get the independence from the North that they desired from soon after the unification in 1990, when they believed that the North had stitched them up and they had a very poor deal, and they believed with much justification that the North did not keep to any of the promises they made. ??ex ??President Hadi, the one who apparently agreed to Saudi air strikes in his quest to keep control is said to be in control of this recapture of Aden – at least, that’s what his masters in Saudi Arabia tell us. So with his appearance, Southern hopes of independence are indeed challenged. And the war is not over yet. Sana’a has been wracked with bombs overnight – they were promised – or maybe the right word is threatened – two hundred would fall on Sana’a in the last 24 hours. And Aden now will inevitably fall under Saudi influence, it’s more open, tolerant society, its enthusiasm for education, all under threat.

Fighting continues in most of Yemen including Aden, whilst most ordinary life in Yemen has stopped, the infrastructure damaged so severely that it will take several generations before life as before is nearly possible.  There will be recriminations, newly fostered hatreds, and power struggles in Aden – and Yemen as a whole even after fighting stops –  Yemen and Aden are still  a long way from peace. We should not get carried away and think this is the beginning of the end, for Aden or elsewhere in this troubled land.   The coalition fighting the Houthis in the south west consists of groups with very different agendas – the Al Hirak secessionists, the Islah militias, Al Qaeda militias, Da’esh militias, the troops still loyal to Hadi, amongst them the forces of Brigadier General Ali Muhsin Al Ahmer, himself a Salafist with a radical Islamic agenda, and of course, Saudi Arabia. To say nothing of Western interests, including United States and Britain.  If they are indeed victorious in the south west, the next stage will be when they all have to decide whose agenda is going to be put into action, and that will be far from easy.  And we can’t presume that the Houthi fighters, if fully defeated, will just go away and leave Aden alone. Everyone will want a reward for their own costs in this bloody and expensive war.  Their divisions may well be irreconcilable.