The Kingdom of Saudi Arabia (KSA) is the largest country in the Arabian Peninsula. To its west is the Red Sea, to the east is the Gulf of Arabia and a short border with Kuwait and Qatar, to the south-east is the United Arab Emirates and Oman, and Yemen is to the south-west of KSA. To the north, it has land boundaries with Jordan and Iraq. 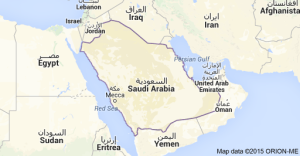 KSA has large reserves of oil, believed to be about 40% of the world’s reserves, and is currently the world’s largest producer of crude oil. Whilst oil dropped significantly in price in 2014, Saudi Arabia can use its windfall of reserves saved from when the oil price as higher to finance its current spending (http://www.quora.com/Falling-Oil-Prices-2014-15/How-will-falling-oil-prices-affect-Saudi-Arabia-economically).

KSA has been purchasing weapons for many decades, many from US and Europe, but the rate…